A former Minister of Communications under the erstwhile John Mahama administration, Edward Omane-Boamah, has labelled ruler of the Ashanti Kingdom, His Royal Majesty, Otumfuo Osei Tutu II as a liar.

Jumping on the bandwagon of National Democratic Congress (NDC) supporters and leaders calling the King of Asanteman as a liar, Dr. Edward Omane-Boamah, in a tweet on his Twitter handle and a comment on facebook has indicated that ahead of next year’s elections, Ghanaians should expect more lies similar to that of Otumfuo to be peddled against John Mahama.

Omane-Boamah’s attack on Asantehene is on the back of Otumfuo’s recent speech delivered at the UN in which he matter-of-factly described how Mahama was unwilling to concede defeat when he had been badly beaten with a million votes margin.

The speech has sent shockwaves across the country and the rest of the world about how Mahama was hell-bent to hang on to power even after his defeat, a situation that threatened the peace and stability of the country.

In an earlier attempt to dismiss the Asantehene’s statement at the United Nations conference, Julius Debrah, a former Chief of Staff under the Mahama administration, in a statement, sought to label Otumfuo as a liar as he said that Mahama conceded defeat without any outside influence.

However, an earlier video captured by UTV in which Otumfuo alluded to the same issues he spoke to at the UN conference, the opposition NDC, checks have revealed, never countered it. It is, therefore, strange that Omane-Boamah and his friends would run helter-skelter in their attempts to discredit what Otumfuo said and to attack his integrity.

Activists of the NDC who are on social media have taken His Royal Majesty to the cleaners and it would appear that the top guns like Omane-Boamah and Julius Debrah are not leaving the party for the young ones as they have joined in lambasting the Asantehene. 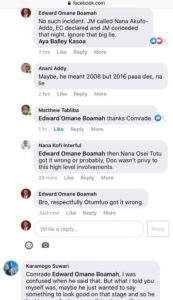 Bawumia celebrates his mom as she clocks 80