A London High Court found Airbus guilty, and imposed a fine of three billion pounds (£3bn) as penalties. Anti-corruption investigators, according to The Guardian, have described the court’s decision as the largest ever corporate fine for bribery in the world. A judge declared the corruption was “grave, pervasive and pernicious.”

The prosecutor stated in court: “Between July 1, 2011 and June 1, 2015, Airbus SE failed to prevent persons associated with Airbus SE from bribing others concerned with the purchase of military transport aircraft by the Government of Ghana, where the said bribery was intended to obtain or retain business or advantage in the conduct of business for Airbus SE”.

Intermediary 5, according to the court document, is a UK national born in Ghana. He was brought to the United Kingdom as a young child and lost touch with his Ghanaian family until the late 1990s. He had no prior experience or expertise in the aerospace industry.

“A “CV” provided to Airbus in 2011 listed Intermediary 5’s employment before 2009 as an events manager for a local authority, director of a football merchandising company and facilities manager for an estate management business.

Page 260 of the book circulating on Social Media states that when Samuel was at the age of nine, John Mahama’s father allowed him to travel with the headmaster and headmistress of his school to England.

“They were a middle-aged couple, childless missionaries with whom Dad had become close. They were fond of Samuel and wanted to oversee the remainder of his primary education in London. Dad, who always wanted to ensure the best of education for his children, agreed. Once the couple arrived in London, they fell out of touch with Dad, and he never saw his son Samuel again,” parts of the book read.

Considering the description of Samuel in My First Coup d’Etat, many have suggested that Intermediary 5 must be Samuel and John Dramani Mahama is Government Official 1 as the two closely fit the description, a close relative of a high ranking elected Ghanaian government official. 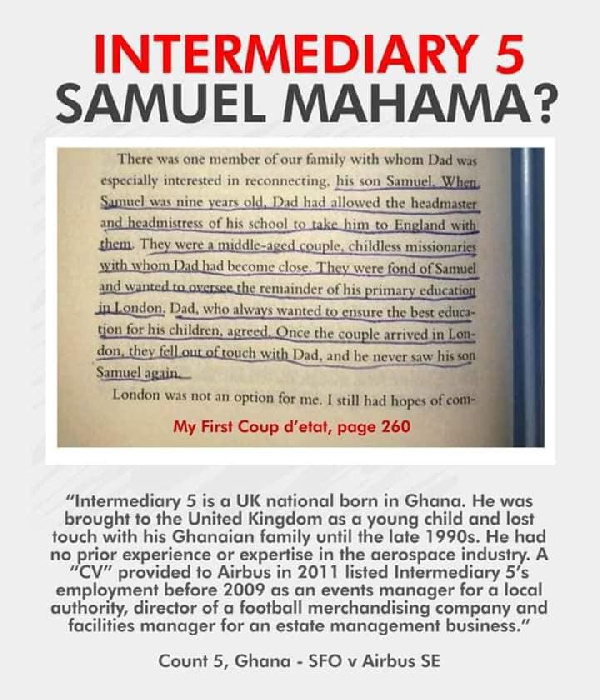 In response to such speculations, a former Attorney General and Minister for Justice under the erstwhile Mahama administration has denied Airbus’s admission.

According to the NDC release signed by the former Attorney General, the ‘Approved Judgement of the Crown Court of Southwark, approving the DPA (Deferred Prosecution Agreement) between Airbus and the UK Serious Fraud Office (SFO) does not allege that any payment was made by Airbus to any Ghanaian Government Official.

“It is, therefore, gross distortion” it continued, for the “media to conclude that officials of the Ghana Government between 2009 and 2015 were bribed or paid any commissions by Airbus for the acquisition of the Casa C-295 aircraft.”