The limited voter registration exercise at the Asokore Mampong Municipal Assembly (AMMA) turned chaotic after the MP for Asawase, Muntaka Mubarak, slapped a young girl believed to be a member of the New Patriotic Party. 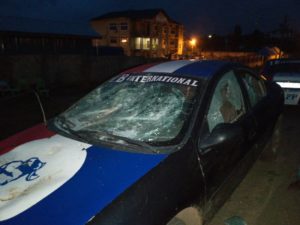 The incident followed an attempt by the young girl to uncover the identity of another lady dressed with her face covered in Niqaab (a fabric worn by Muslim women to cover their face), who claimed she had seen some members of the NPP taken one of the EC’s registration machines into the AMMA building on Thursday to register their members secretly.

Following the claim, some leaders of both the NDC and NPP in the constituency together with some officials of the EC and the MP met to listen to and ascertain the veracity or otherwise of the claim. 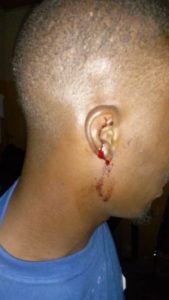 After the meeting that lasted not more than 20 minutes, the Honourable MP right at the main entrance of the EC’s premises slapped the young lady after she attempted to remove the Niqaab of the claimant ostensibly to uncover the latter’s identity.

The NDC’s Asawase constituency chairman, Alhaji Mutum, who was right behind the claimant, also punched the girl in the face following which other members of both parties present engaged each other in fisticuffs.

They hurled chairs and stones at each other resulting in a number of people sustaining various degrees of injuries, some cars’ glasses smashed and motorbikes other properties within sight damaged.

The situation would have turned murkier but for the timely intervention of the police whose presence at the scene dispersed the rioting party members.