JoyNewsRoom has intercepted a letter dated 9th November, 2015 signed by the former MD of BOST, Mr. Kwame Awuah Darko and addressed to the Manager of First Atlantic Bank, asking the bank to transfer an amount of three million Ghana Cedis into an account number 1018631473188 with an Account Name Chief of Staff’s Sundries No.1, an account operated by former Chief of Staff, Mr. Julius Debrah.

Sources at both the Energy Ministry and BOST say that no such security services were rendered to warrant such huge payments to the former Chief of Staff and confidante of former President Mahama.

One staff at the Ministry wondered why the current Government is reluctant in following the whereabouts of the money and make the former Chief of Staff account for it.

The NPP Government has had a share of its BOST controversies resulting in the dismissal of the former MD, Mr. Obeng. The successor of Mr. Obeng is also faced with controversy surrounding the missing 600,000 litres of oil. The value of the missing oil is said to be over $50m. 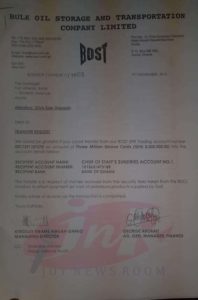 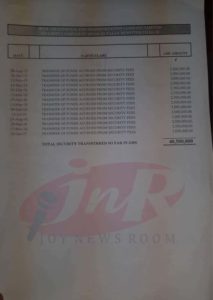