The Chartered Institute of Bankers (Ghana), the professional body for banks and financial institutions in Ghana, on Tuesday, 27th November, 2018, honoured Dr. Mahamudu Bawumia, Vice President of the Republic, at the 22nd National Banking Conference in Accra. 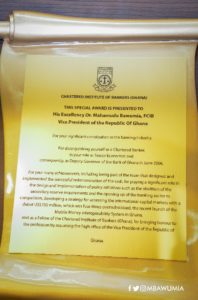 The award was in recognition of the special role Vice President Bawumia played in the development of the Institute, his contributions toward transforming the banking sector and for his overall performance in the financial landscape of Ghana.

Vice President Mahamudu Bawumia was made a Fellow of the Chartered Institute of Bankers in 2007.

The citation accompanying the plaque, which was handed over to Vice President Bawumia by the President of CIB-Ghana, Rev. Mrs. Patricia Sappor reads:

“This Special Award is presented to His Excellency Dr. Mahamudu Bawumia, FCIB, Vice President of Ghana, for your significant contribution to the banking industry

“For distinguishing yourself as a Chartered Banker, in your role as Senior Economist and consequently, as Deputy Governor of the Bank of Ghana in June 2006.

“For your many achievements, including being part of the team that designed and implemented the successful redenomination of the cedis, for playing a significant role in the design and implementation of policy initiatives such as the abolition of the secondary reserve requirements and the opening up of the banking sector to competition, developing a strategy for accessing the international capital markets with a debut US$ 750 million, which was four times oversubscribed,

“The recent launch of the Mobile Money Interoperability System in Ghana, and as a Fellow of the Chartered Institute of Bankers (Ghana), for bringing honour to the profession by assuming the high office of the Vice President of the Republic of Ghana.”

Dr. Mahamudu Bawumia expressed his appreciation to the executives and members of the Chartered Institute of Bankers (Ghana) for the honour done him.

NDC Man Booms ‘We Are Anti-Muslim’s

NDC Man Booms ‘We Are Anti-Muslim’s