The Ghana Palaver newspaper, an avowed supporter of the NDC, has pleaded with an Accra High Court to allow it to unreservedly apologise to Mr Asare ‘Gabby’ Otchere-Darko, a private legal practitioner in Accra, for publishing false and libelous material about him.

The paper, published by Revalap Publishers and Suppliers, and located at Weija in Accra, has also accepted to pay the filing fees and other costs associated with Mr Otchere-Darko’s suit.

The paper had claimed in a lead story that the “controversial Finance Minister and cousin of President Akufo Addo, Ken Ofori Atta, has packaged a juicy contract and given it to a law firm founded by his equally controversial nephew, Asare Otchere Darko, popularly called Gabby.”

The story came with the blazing banner headline “Revealed: Ken Ofori Atta gives Gabby Otchere Darko US$ 20M Review Contract”, and described this supposed contract as another example of the “obscene form of nepotism and cronyism that have characterised the Akufo Addo government”

Not amused, Mr Otchere-Darko sued, and even though the defendants tried to dodge being served with the writ, had to read it in the dailies and acknowledge service.

In a humbling climb down from their earlier claims of fraud and nepotism, the publishers and Editors of the Palaver Newspaper, represented by Revalap Publishers and Suppliers and Eric Amedjoe, have pledged to publish “an unqualified apology and full retraction of the story that gave rise to this suit, giving it front-page banner headline in the Ghana Palaver” within 14 days of the Consent Judgement.

“The defendants shall reimburse the plaintiff of the filing fees for all the processes filed so far in the suit, within thirty (30) days of entry of this settlement as consent judgement.

” The plaintiff fully reserves the right to move against the defendants should they default…”, the agreement, supervised by Justice Eric Kyei Baffuor, High Court Judge, and signed on 20th November, 2018, read. 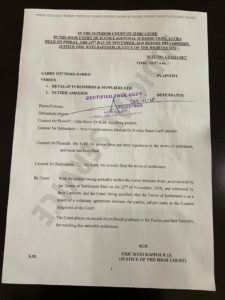 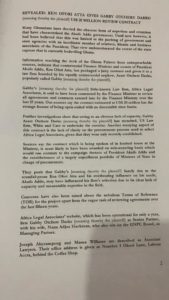 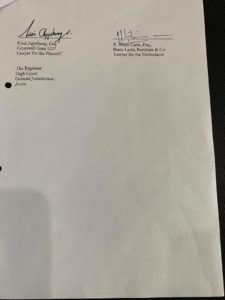 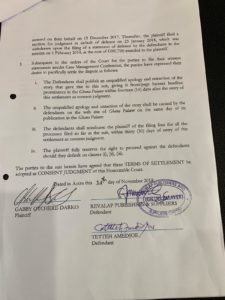