Salifu Gonga, a resident of Chereponi who has been forced to use crutches after an election-related incident in the district, is seeking justice and support from the New Patriotic Party (NPP).

Safilu, 24, was among some residents who sustained gunshot wounds during an incident that led to the death of one person in the run-up to 2016 general elections, after an attack by persons reported to be affiliated to the National Democratic Congress (NDC).

A harmless stroll with his friends around the NDC chairman’s house, prior to the polls cost him that fateful evening.

He claims that an order was given for him to be shot at when he was identified as a brother of a staunch NPP supporter in the area.

“At the NDC chairman’s house, a group of young men numbering over forty rushed on us and asked which political party we belong to and we told them we are students and do not belong to any party. They threatened us and one man identified me as Alidu Gonga’s brother from Nansoni, therefore, we are NPP.”

“Another rushed with a cutlass and hit me on the head and they started beating us. We had had to run for our lives. I heard one guy called Baibu Yombu instructed Banye Kwaku to shoot whiles we were running. I heard the shot and I was on the ground. I know them, the one who shot me and the person who instructed him.” 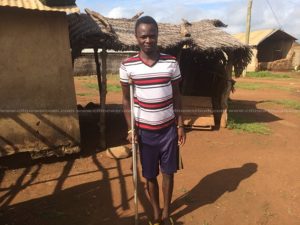 Although the case is before the court currently, he is worried about the slow pace of proceedings.

“The perpetrators were apprehended and given bail and up till now anytime we go to the court in Yendi, its just go and come, go and come. We don’t know anything about it and I see that the case is going waste” he said.

He told Citi News how the situation has affected his dreams of pursuing further studies. He claims the New Patriotic Party, (NPP), for which he nearly lost his life has not done much to assist him.

“It has affected me so much because since 2014 that I completed school, I should written private exams to better my results and even gone to school, but see how I am walking, I can’t go to Tamale for studies because of my condition. So I am just there like that”.

Salifu’s brother, Alidu Gonga, is now left with his brother as a dependent.

“…Because of the incident that happened to him, he can no longer do anything on his own, I have to provide everything for him, what to eat and drink all depends on me and so he is now a burden on me,” he said.

Alidu Gonga has appealed to the NPP to come to their aid, and warned that this could influence the loyalty of NPP youth in the area.

“We are appealing to NPP executives, both regional and national to come to our aid… they identified him as Alidu Gonga’s brother which I am one of the active members of NPP, and that was why they assaulted him, and if the NPP does not do anything to support us, I don’t think NPP will get the support of the youth anymore in Chereponi. The youth are very angry about the issue” he stated.

Mahama has defeated Nana Addo before, he’ll do it again – Hannah Bisiw

Kofi Annan bridged gap between UN and the people – Guterres

Kofi Annan bridged gap between UN and the people – Guterres