The Governing Council of the Kwame Nkrumah University of Science and Technology (KNUST) has been dissolved by government.

This is a fallout from meetings between the government, university management and stakeholders over the recent violent protest by students that has led to a closure of the school.

A statement from the government said a 7-member Interim Council will be put in place to oversee the affairs of the school, while the school which has been closed since Tuesday following the violence, will be opened within 14-days.

The government said the interim council will be chaired by the Paramount Chief of Bompata Traditional Area, Nana Effa Apenteng for the 3-month period it has been given to serve.

The new council is also expected to expedite the reopening of the university.

The government’s statement in justifying the need for the new interim governing council said council was “not in a position to review its own processes and decisions affecting the student body to guarantee peace.”

Read the full statement below:

Government has dissolved the KNUST Council and, in its stead, put in place a 7-member Interim Council. It has also directed that the University reopens within fourteen days to enable academic work to continue.

The Interim Council, chaired by Nana Effah Apenteng, Paramount Chief of the Bompata Traditional Area, has a three-month tenure.

This follows briefs and recommendations made by the Minister for Education, Hon. Dr. Matthew Opoku Prempeh after he led a high powered delegation, including the Minister for National Security, Hon. Albert Kan Dapaah and the Minister-Designate for Information, Hon. Kojo Oppong Nkrumah to Kumasi.

It will be recalled that on Monday 22nd October 2018, there were disturbances on KNUST campus in Kumasi during which property was vandalized.   The university was subsequently shut down indefinitely upon the advice of the Regional Security Council.

The view of the university management, as the delegation observed, was that increasingly, there had been acts of wayward behaviour, hooliganism and incidents of violence on campus, hence the need to take steps to protect life and property.

The position of the student leadership was that the issues go beyond the university’s policy to convert all the halls of residence into mixed sex halls. It emerged further that the students felt oppressed by some policies of the university authorities and that they lived in fear. They believed they did not have enough opportunities for conflict resolution and dialogue with the authorities, resulting in a breakdown of trust between students and the authorities.

Government’s immediate priority is to expedite the reopening of the university to ensure a smooth return to academic work. This view is shared by the university’s lecturers. Government is also mindful of an adverse international image the country would suffer if the university remained closed for a protracted period, especially given the substantial number of foreign students at KNUST. However, government has been advised by the Ashanti Regional Security Council that without a resolution of the relevant matters, it would not be safe to reopen the university.

The Ministry took the view that the Governing Council was not in a position to review its own processes and decisions affecting the student body to guarantee peace. Subsequently, the Ministry of Education recommended to government the suspension of the university’s Governing Council and the establishment of an Interim Council.

The government subsequently directed the suspension of the KNUST Governing Council and the establishment of a seven-member Interim Management Committee (IMC) chaired by Nana Effah Apenteng, Paramount Chief of the Bompata Traditional Area. The IMC, which was inaugurated earlier today, has a three-month mandate to oversee the day-to-day running of the university and to investigate all outstanding matters in order to expedite the reopening of the university.

Government unreservedly condemns the damage to private and public property during the disturbances as unacceptable in any circumstances, and states for emphasis that those found culpable following investigations will be surcharged accordingly.

It is the expectation of government that the IC will work assiduously per its terms of reference, culminating in the early reopening of the university to restore normalcy. 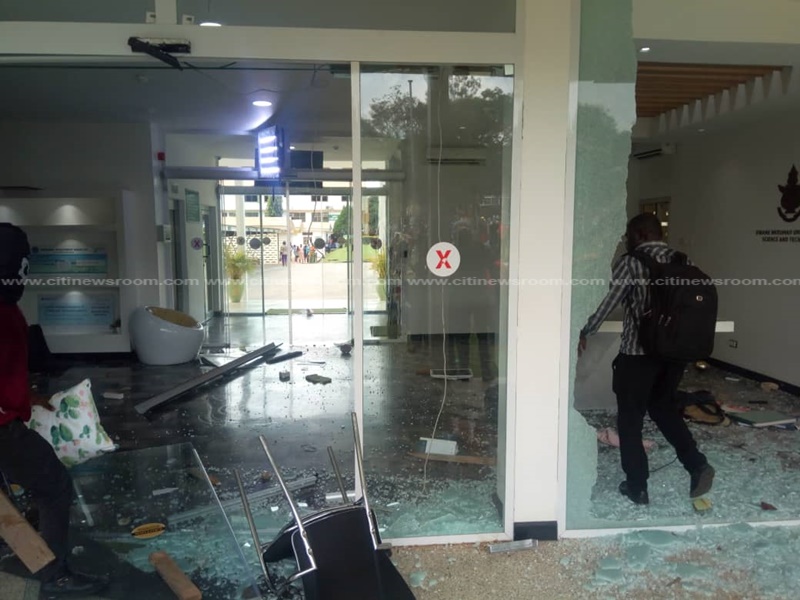 The arrest of 10 students and one alumnus of the school compelled the Students’ Representative Council (SRC) to mobilize for the Monday protest.

The students were arrested for a holding vigil on campus last Friday without permission, according to the school authorities.

One other student who was allegedly manhandled by the internal security was hospitalized at the KNUST hospital.

The Executive Council of the SRC said the demonstration was necessary to convey students’ frustration over disrespect and oppression by the school.

The arrests came after the KNUST management served notice that it had suspended the organization of vigils (morales) in the school.

The management said this was because of “several negative issues encountered recently concerning morales in the hall.”

Some of the protesters called for the removal of the Vice-Chancellor.

The SRC said the actions of the campus security and the police officers were a “gross deviation” because the two agencies were instead to protect them.

The Council also promised students that it would ensure the security officers who allegedly beat up students are held accountable while urging students to remain calm.

Over twenty students were arrested following the incident.

Trotro drivers to increase fares from Monday because of fuel increase

Alabi is the solution to NDC's problems - Victor Gbeho

Alabi is the solution to NDC's problems - Victor Gbeho