Over a million cubic metres of various waste materials have been removed from the choking Odaw storm drain and the Korle Lagoon in Accra since February this year as part of measures by government to reduce flooding in most parts of the city.

Engineers and workers of Dredge Masters Limited have since February this year been at the two sites, which have become a receptacle for a chunk of Accra’s waste, de-silting the drainage system and the lagoon.

On the back of Monday’s rains that caused some flooding in parts of Accra, President Nana Addo Dankwa Akufo-Addo on Tuesday visited the sites to inspect the progress of work on the dredging on the Odaw drains.

He was taken round by the Hydrological Engineer of Dredge Masters, Ing.Wise Ametefe and shown the new designs by Dredge Masters to overhaul the Odaw drain and the Korle Lagoon into a beautiful tourism asset to attract tourists and boost business activities in the area.

The President was impressed about the work done so far by the contractors of the project.

The dredging exercise is being carried out day and night in a bid to restore the efficiency and holding capacity of the drainage to be able to contain the volume of water, especially when it rains. This will avoid flooding.

The is being done in line with a two-year contract signed between the government and Dredge Masters in February 2019 for the dredging and maintenance of the Odaw drainage system and the Korle Lagoon.

Per the contract, Dredge Masters, which is a subsidiary of the Jospong Group of Companies, is required to redesign and construct the Korle Lagoon Ecological Restoration Project (KLERP) interceptor and breakwater at the outfall within the next two years. 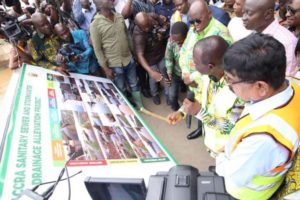 The channel under the scope starts from the Odaw Onyasia confluence at Carprice in Accra, through Avenor, Kwame Nkrumah Interchange, Agbogbloshie, South Kaneshie drain and, the upper and lower Lagoon.

Operations Manager of Dredge Masters, Ing. Sena Adiepena, told the President Nana Akufo-Addo that prior to commencement of the exercise, squatters along the drains were evicted with assistance of the Accra Metropolitan Assembly and the Ghana Police Service.

He assured the President that they were working around the clock to complete the work on time to save lives and properties.

Dredge Masters first begun operations in June 2016, a year after the June 3 disaster at the Kwame Nkrumah Circle that claimed several lives and destroyed property.

It initially secured a two-year contract awarded by the government under John Dramani Mahama for the de-silting and dredging of the Odaw channel and restoration of the Korle Lagoon to avert under the Accra Sanitary Sewer Storm Drainage Alleviation Project.

Ing. Adiepena told journalists works under the initial contract was completed in March 2017 as designs on civil works are still ongoing.

EC can’t rig elections, not even for my father – Jean Mensa replies critics

Ghana does not belong to Asamoah Gyan, he can go – Grunsah

Ghana does not belong to Asamoah Gyan, he can go – Grunsah