Board Chairman of the Youth Employment Agency (YEA), Sammi Awuku has cautioned Ambassadors of the Agency to be professional in their approach to duty, by exhibiting the highest standards.

Mr. Awuku who sounded peeved about the somewhat negative hype and feedback generated from the visit of the Ambassadors to former president John Agyekum Kufuor yesterday, Thursday, July 4 2019 did not mince words in condemning what he describes as unprofessional conduct on the part of the Ambassadors.

The picture went viral with various captions and commentary, with many suggesting the former president was fixated at the boobs of the young singer.

But the charismatic and hardworking Mr. Awuku who also doubles as the National Organiser of the ruling New Patriotic Party (NPP) is not in the least enthused about the turn of events.

He took to his Facebook Page and wrote ‘’ Management must ensure that Ambassadors stick to the Highest Level of Professionalism when paying such courtesy calls. Management must also ensure that the Ambassadors use these visits to project the very vision of the Board and Project the new employment opportunities the Agency is offering to the teeming unemployed Youth of our Country’’.

He added that ‘’ Those willing to cooperate should be supported and welcomed and those unwilling to go by these standards MUST be shown the exit. Let’s be focused and NOT Major in the Minors as we rally round to provide jobs for the many unemployed Youth of our Country’’. 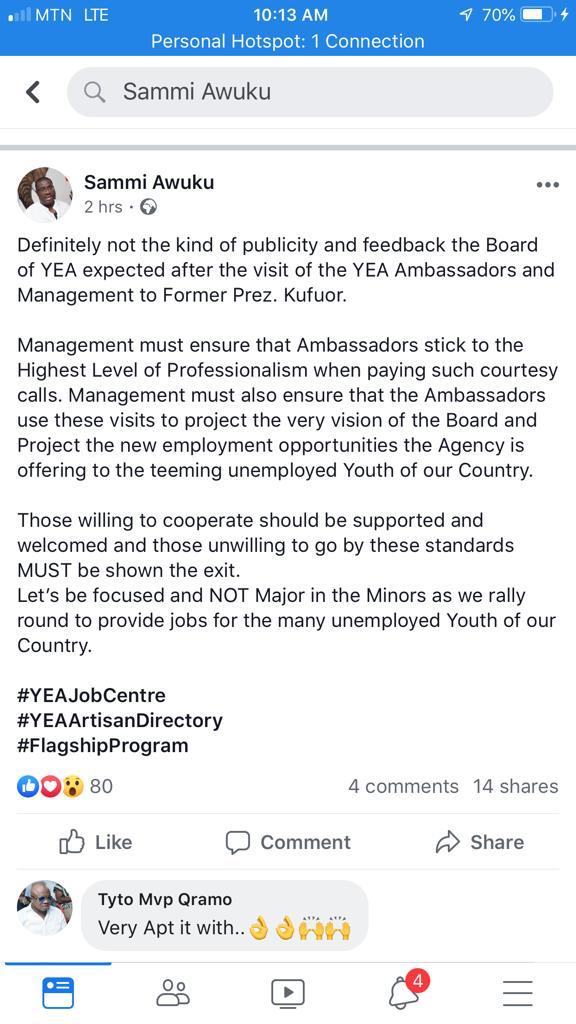 Asiedu Nketia Warns Haruna Iddrisu “Retract or We Punish You”

Asiedu Nketia Warns Haruna Iddrisu “Retract or We Punish You”