Following the brawl at the 20th edition of the Ghana Music Awards, dancehall artiste Stonebwoy has rendered an unqualified apology to patrons and Ghanaians for pulling a gun on stage.

The winner of ‘Reggae/Dancehall Artiste of the Year’ said he pulled out his gun “out of natural instincts.”

“I am really sorry for the incident that happened earlier on and I only had to react out of natural instincts because we all know how premeditative some people can be.

“We’ve seen on social media the threats and everything so we couldn’t come in unprepared because anything could have happened like you guys saw,” he said.

A fracas broke out between Stonebwoy and Shatta Wale and their respective entourages as Stonebwoy was on stage to accept his award for the winning the Reggae/Dancehall Artiste of the Year’.

Shatta Wale and his entourage rushed the stage whilst Stonebwoy was there, creating a commotion during which Stonebwoy reportedly pulled his gun.

It’s unclear what Shatta Wale’s intentions were considering the fact that the two have hardly seen eye to eye in the past years. 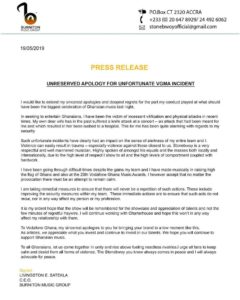 NPP Will Win 2020 Due To Strong Economy – EIU Report