Some of the travelers called on Ghanaians to vote for the former president to come and continue what they called his “good works”. It can rival any modern terminal anywhere in the world.

The project cost some $250m and would bolster Ghana’s image globally as the gateway to West Africa and further place Ghana on the map as the aviation hub in Africa which will successfully facilitate the movement of people and businesses in and out of the country.

At the arrival, both level 1 and 2 will have 24 immigration counters, 4 E-gate positions, expandable to 6, 4 inclined carousels expandable to 6 in the future, a fully automated baggage handling system designed in accordance with the latest European Civil Aviation Conference Hold Baggage Screening requirements expected to handle 3000 bags per hour as well as Meeters and Greeters Area. 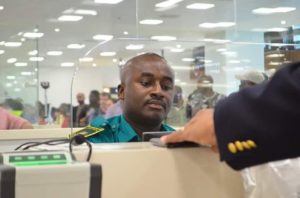 I HAVE NOT ENDORSED MAHAMA FOR 2020- Dr. Ivy Ntiamoah