The controversial MP wondered why the former President in spite of the terminal 3 project and many other projects still suffered such a humiliating defeat at the hands of President Akufo-Addo.

In a Facebook post, the MP chastised Ghanaians for disguising hate as incompetence. The NDC rising MP is noted for his controversial remarks in his attempts to defend the former President’s records. 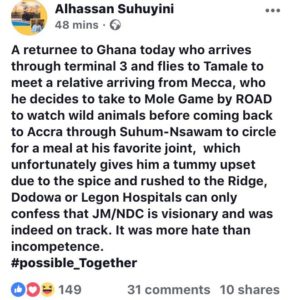