Member of Parliament for Efutu says comments by law professor, Raymond Atuguba on the induction of a new Vice-Chancellor for the University of Education, Winneba are misleading.

The Professor made the remark while expressing disappointment in the President, Nana Akufo-Addo for attending the induction ceremony Monday.

A Winneba High Court in July ordered the then Vice Chancellor, Prof Mawutor Avokeh, to step aside until a case brought against him by one Kofi Supi Kwayera is determined.

The orders were part of the reliefs granted for the interlocutory injunction sought by Kwayera in the case brought against the University which alleged that Prof Avokeh and the university’s finance Officer were operating under a defunct governing council.

The court then ordered then Pro-Vice Chancellor Prof Anthony Afful-Boni to act until a determination is arrived at on the case.

But before a final verdict could be given by the court, Prof Afful-Boni has been sworn in as substantive Vice-Chancellor of the University. 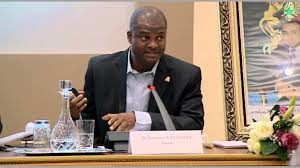 Prof Atuguba sees the decision and the subsequent induction of the reverend father as an illegality, adding that it the president’s participation is a travesty of the rule of law.

He does not understand why the case challenging the removal of the previous vice-chancellor was not allowed to reach a conclusion before a new person was inducted.

“When a change of government occurred in January 2017, a certain cabal (for lack of a better word) that is associated with Winneba saw this as an opportunity to change principal officers of the University of Education, Winneba. After acting as a lawyer for the victims of this move, I can only conclude that the only real reason for their removal was ethnocentric. So Vice Chancellor Avoke, Finance Officer Akorlie, and bearers of similar such names had to go. Note that this is not an isolated incident.

“At the moment, I am also a lawyer for VC Dzisah of the Ghana Institute of Journalism, who, like Avoke and Akorlie bear names that are not quite “right”. I must say that the whole enterprise was so revolting, distasteful and crude that I constantly had mental and tummy convulsions in conducting the cases, until I decided to withdraw my representation before I was tempted to say things in court that are unprofessional and jeopardise my clients’ cases,” Prof Atuguba said in a strongly worded statement.

But Mr Markin said the law professor got it all wrong. “Clearly Prof Autuguba has misinformed you and the listening public,” he said on Joy FMs Top Story.

He explained that he was in court when an ex parte motion was moved by junior counsel from Prof Atuguba’s law firm seeking certain reliefs which were lifted from a substantive originating summon which was filed on September 10, 2018.

The judge refused to hear the case, citing breaches of the law, Mr Markin continued.

He said there was no way the judge could have heard the case because they filed their originating summons on September 10, and filed a motion for an injunction on the investiture on the 11th and took 14 September to move the court.

Related: Court did not order closure of UEW – Afenyo-Markin

According to the MP, the judge told them, “if you want to deal with this matter, serve them a hearing notice that is on the issue of the investiture.

“Raymond’s junior at the bar insisted that the investiture was taking place this afternoon, the judge said ‘no I won’t touch it, if you want to injunct someone, you go by the rules of the court, so what Raymond [Prof Atuguba] is saying is an absolute falsehood,” the MP said.

On the tribal issues raised by Prof Atuguba, Mr Markin he urged the law professor the stick to doing the law in court and stop playing to the gallery.

“Let’s not appeal to emotions. It is not about how loud you cry that will make the court hear you,” he said citing Jesse Turkson V EOCO.

“They should stop the emotional appeal and tribal sentiments,” he charged adding that the law professor should present their case using the appropriate procedures.

Only then can the court hear their case, he stressed.

ICU warns politicians against fuel politics; both parties have failed us