“KOJO BONSU HAS A DETERMINED SPIRIT, I ADMIRE HIM” – RAWLINGS

Founder of the opposition National Democratic Congress Jerry John Rawlings has backed the decision of the former Mayor of Kumasi Metropolitan Assembly Mr. Kojo Bonsu to lead the NDC into the 2020 polls.

Furtherance to this massive endorsement, the former President and most successful NDC leader has passed a testimony considered as very favourable to the Kojo Bonsu campaign and a strategically positioned feather in his cap from Mr. Rawlings.

Sources close to the party hierarchy, have disclosed that the rare endorsement from the party’s founder has caused bitter undercurrents of anger within the NDC with some spiting the former President for not being equally receptive to other aspirants especially former John Mahama who also visited him.

Until news broke about his intention to lead the NDC, Kojo Bonsu was a considered staunch supporter of the Mahama 2020 bid.

He was instrumental in the organisation of the party’s Unity Walk project across the 10 regions of the country which has been credited for re-ernergising the grassroots base of the opposition party. 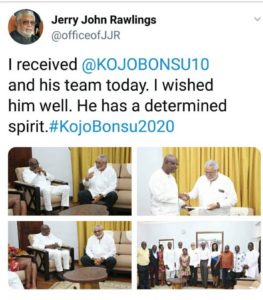