The National Democratic Congress Member of Parliament of Kumbungu Constituency, Ras Mubarak, has revealed that the NDC as a political party has become a joke.

The MP was commenting on the impending presidential primaries of the opposition NDC.

In a Facebook post, the MP called for an amendment of the NDC constitution to reduce the party from “the butt of public jokes”.

It seems the MP is outraged by the ballooning number of aspirants contesting former President Mahama for the coveted post in the NDC.

The former Kumasi Metropolitan boss, Kojo Bonsu, a confidante of Mr. John Mahama, is the latest to join the NDC presidential race. 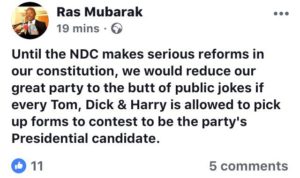 Mahama Is Stubborn, He Does Not Listen To Good Advice - Mr.Ashietey Adjei