Stonebwoy has also responded to Shatta Wale’s claim that he did not know Stonebwoy and Samini were prevented from staging a surprise act at the ‘Reign’ concert.

Earlier today, Samini tweeted that he and Stonebwoy had wanted to surprise Shatta Wale with a performance at his album launch which was held at the Fantasy Dome on Saturday, but they were not allowed.

“Congrats @shattawalegh on your album launch.just like you once wanted to surprise me on saminifest stage and I let you, I’d wanted to do the same but I waited in the car together with @stonebwoyb for over an hour only to be told you refused the gesture. #supportourown huh??” he had tweeted.

Even though Samini did not mention who particularly prevented them from performing at the album launch of their ‘rival,’ some had perceived that it might have been an order from Shatta Wale.

Shatta Wale then replied Samini’s tweet, saying he did not know of the said incident.

Stonebwoy who appeared unsatisfied by Shatta Wale’s response, also took to Twitter to suggest that Shatta Wale was not being truthful.

“Surprise Support is Way Better Than. A Fake Twit. But For INSECURITY Problems !! You Refused To Take advantage of The Opportunity. Would You Have Asked The Crowed if you Weren’t AWARE. Why Lie? Feel Free Come On We Knew You Will Refuse Us Anyway. #ATTWC27Oct Come See!” he tweeted. 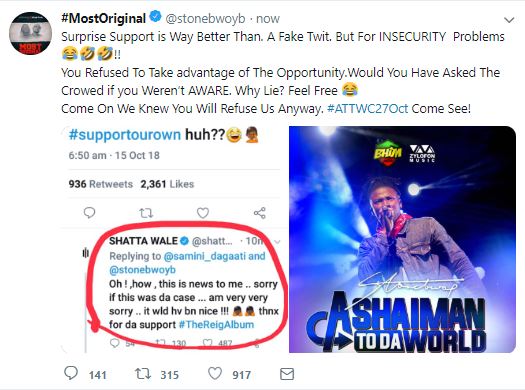 The ‘Reign’ album launch was attended by thousands of music fans across the country.

Shatta Wale performed some of his hit tracks to the fans who had come from far and near to support him.

Other people who shared the stage with him were Shatta Michy, Ramzy, Efe Keyz, Zylo and the Militants.

‘IF Your Free SHS Is Good, Why Are People Complaining?’ – Prof Opoku Agyeman Asks Gov’t

‘IF Your Free SHS Is Good, Why Are People Complaining?’ – Prof Opoku Agyeman Asks Gov’t