The Supreme Court is set to hear a suit challenging the constitutionality of a referendum which will lead to the creation of six new regions.

A group, Strategic Thinkers Network Africa, maintain the limitation of the referendum to only areas falling within the proposed regions is arbitrary and improper.

Ghana is set for its second referendum since 1992 which could add six more administrative regions to the existing ten. The new regions are to be known as Oti, Ahafo, Brong East, Western North, North East and Savanna.

The referendum, expected in December 2018, is a recommendation of the Justice Alan Brobbey Commission of Enquiry set up in November to hear petitions in areas demanding a re-demarcation of the regions.

In its report presented to the president in June 2018, the Commission recommended that the referendum be limited to only registered voters within the proposed regions.

In the Western region, nine districts could be taken out to form the new Western North region. Eleven municipalities, districts and towns in the Volta region could also be carved out to create the Oti region. 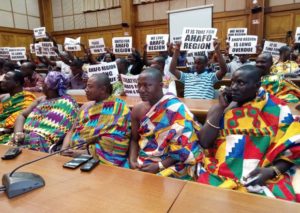 Photo: Some traditional rulers in the Brong Ahafo region are leading the creation of new regions

The Electoral Commission has selected these municipalities and districts for a limited voters registration exercise to enfranchise eligible Ghanaians.

But the recommendation by the Commission and the Electoral Commission’s plan for the referendum has irked a pressure group STRANET Africa.

The group, represented in court by Godwin Edudzi Kudzo Tameklo say because Ghana is a unitary state governed by one central government, the entire region must determine whether it wants to be divided.

The plaintiff, Gideon Tettey of STRATNET, maintains, the vote has implications for those living outside of the proposed areas for the new regions and therefore every registered voter in the region must have a say.

They said if the referendum is about creating a new state or country, then only those living within the proposed areas could be allowed to vote.

But what the government is set to do is create mere administrative regions, the group has observed.

The suit stated that the “discernible spirit” of Article 4 and 5 of the 1992 Constitution is that as a unitary state, there can be no division of a region through a referendum without the say of registered voters in the region.

STRANET said government’s decision to allow only those within the proposed regions to determine the division of an entire region is “manifestly absurd” because the demarcations will affect everybody else living within the region.

The government has 14 days to file its statement of defence.