Hajia Alima Mahama said one of the major drawbacks against government’s fight against illegal mining is that persons appointed by the president are themselves engage in the act.

Speaking the Inter-Ministerial Committee on mining meeting on the roadmap to lifting the ban on illegal mining, she said the perpetrators, regardless of their status will no longer be shielded.

According to her, reports about the DCEs and MCEs involvement in the illegal act is worrying and not only should they put a stop to it, they must ensure that government wins the fight.

“The reports we are getting are not good. At the right time, we will provide names to those who are not doing their best in this regard. Go back home and take this activity seriously.

“We are going to put the national security on you so if you know that you’re engaged in galamsey, tell yourself that today it is finished, because if we get a report about you doing galamsey we are not even to call you to ask you,” she added. 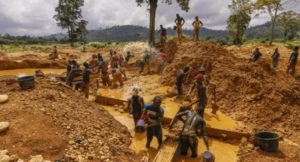 Activities of illegal small-scale miners have resulted in the pollution of most of the country’s water bodies resulting in the shortage of water in some communities as the Ghana Water Company struggles to treat water for consumption.

Operation Vanguard, a team of military and police personnel have been deployed to some mining communities until government lifts a ban imposed in 2017.

However, speculations are rife that politicians, chiefs and other government appointees are themselves deeply involved in the illegal act.

No names have yet been mentioned but many are of the view that the failure of government to nip the act in the bud is as a result of the involvement of these appointees.

Hajia Mahama who is worried about the state of the country’s water bodies said government is serious about the fight and will not entertain anything or anybody that stands in its way.

“Don’t think that you can’t do anything and hide. You cannot hide, the government has a long arm whatever you do the president and chief of staff will know. Even when you say a word, they will know so you cannot do something and feel that you can sleep.”

The Akufo-Addo-led administration upon resumption of office in 2017 placed a ban on all small-scale mining across the country.

But Head of the Third World Network-Africa, Yao Graham is unimpressed with the Minister’s warning.

He said her admission that some political figures are involved in the illegal act is no news and what government should do is to immediately take action against them rather than issuing threats or warnings.

Dr Graham said if government is serious about the rule of law and equality before it, it would have long taken action.

“Legally mandated businesses are being destroyed in the name of anti-galamsey because the small people with licenses businesses have been killed by this long ban. 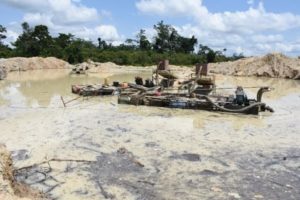 “But people who are heads of criminal conspiracies are actually in political office and are being given the chance to repent rather than being arrested to symbolise that government’s commitment to fighting galamsey,” he said.

He added that “if they are going to be asked to change their ways, what is the point then rampaging around the country with operation vanguard

Dr Graham is of the view that letting these big men slip away makes a travesty of government’s claim that it wants to fight illegal mining.